10 Year Anniversary of Miles Beale at the WSTA

This summer marks the 10th anniversary of Miles Beale taking up the post as Chief Executive of the Wine and Spirit Trade Association. A lot has happened in the industry during those ten years, including wine overtaking beer as the UK’s most popular drink, an impressive revival in the popularity of British gin dubbed the ‘ginaissance’ and the rise and rise of English wine. We couldn’t let this momentous week pass without mentioning a few of the key issues, which under his leadership, the WSTA has battled on behalf of its members over the last decade.

Miles has steered the ship through a stormy period in UK alcohol taxation, seeing off the duty escalator and persuading Government to introduce a series of much needed cuts and freezes to alcohol duty. He is now very much at the forefront of campaigning to deliver a fairer and simpler system, as the Treasury finalises a review of the UK’s alcohol taxation system. The dedication to this cause meant Miles recently giving up a Saturday night to go to Newport in Wales when an opportunity arose to attend the Welsh Conservative dinner. Not everyone’s idea of a good Saturday night out, but Miles took one for the team, as it meant taking a seat next to the then Chancellor. This gave Miles a unique opportunity to tell Rishi Sunak, first-hand, how the wine and spirit sector would be impacted by the proposed changes. Hats off to you Miles!

But it’s not all been about duty. Miles has been at the helm of the WSTA to see off the introduction of MUP in England, ensure that glass was kept out of the Deposit Return Scheme in England and Northern Ireland. Under his leadership the WSTA has also been pioneers in practical labelling for alcoholic drinks, given guidance and advise for the growing no and low category, championed drinks across the globe in numerous trade missions, battled to overcome challenges at the borders and helped the industry improve and maintain more responsible sales of wines and spirits in the UK.

We also need to mention that during this time Miles has played a key role in growing Community Alcohol Partnerships (CAP), which supports communities across the UK to reduce alcohol harm among young people. During his mentorship CAPs have gone from 30 to 300. Starting off under the wing of the WSTA the organisation has none moved on to a fully-fledged Community Interest Company (CIC) operating under an independent chair. CAP has an impressive track record in reducing alcohol harm for children and young people across more than 250 projects in the UK. It has earned a reputation as best in class in preventing underage drinking, creating a responsible retailing ethos and promoting the health and wellbeing of children. You can find out more about them here.

Hang on, we don’t want to over do this, but we haven’t even given the guy credit for leading the sector as it navigated its way through Brexit, followed swiftly by dealing with a global pandemic. Quite an extraordinary time to be a Chief Executive of a Trade Association, I am sure you will agree.

Come on we can’t finish here without mentioning that Miles has come in at number one, the last three years running, in the Drinks Retailing Top 100 most influential people in wine! Right, that is enough massaging of the boss’s ego. Thank you for a decade of dedication Miles, well done. Now back to work!

To mark 10 years of hard graft at the WSTA I decided to pen a limerick for Miles. Turns out it’s harder than you think to write a limerick…. Here’s my attempt. I am sure some of you can do better. Email lucy@wsta.co.uk your Miles Beale inspired limericks (keep it clean), there might even be a prize up for grabs if at the WSTA Industry #GetTogether!

There once was this nice chap named Miles

Who generally graced us with smiles

During ten years in charge

Including a chat with Adrian Chiles

But there’s one thing that sparks his frustration

He’s not asking much

So, to the Chancellor, whoever that may be

We beg you to think sensibly

For a decade of pure dedication

And deliver a system with prosperity 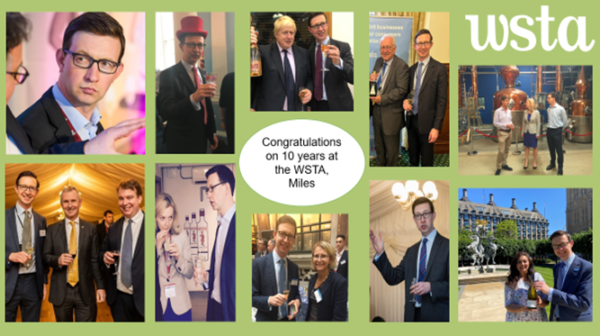 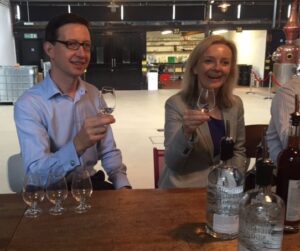