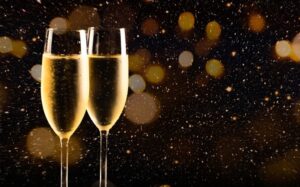 Sales of sparkling wine and Champagne, combined, reached a record high this year when Brits bought almost £2.2 billion worth of fizz.

The Wine and Spirit Trade Association’s latest market report shows that almost 165 million bottles of sparkling wine and Champagne were sold in the UK in the last recorded 12 months.

A record £1.5 billion, the equivalent of 146 million bottles, of this was from sales of sparkling wine alone.

And supermarket wine buyers are reporting a boost in sales of Crémant, a French sparkling wine, this festive season.

The UK’s sales of sparkling wine have enjoyed rapid growth in the last decade, however more recently the category’s growth is slowing. Despite this 2018 still saw more sparkling wine sold in the UK than any previous year.

Combined sales of sparkling wine and Champagne have almost doubled in volume and value in the last five years.

The popularity of fizz has helped to boost the English wine industry which this year saw a record harvest following near perfect growing conditions following the 2018 heatwave.

Last year around 5.9 million bottles of English and Welsh wine were produced by vineyards, this year’s harvest is expected to exceed 6 million bottles.

The Ridgeview estate in Sussex was last month awarded the coveted trophy of the world’s best winemaker in the International Wine and Spirit Competition. This is the first time in the IWSC’s 49-year history that the award has been presented to an English producer.

The sparkling wine category includes Prosecco, Cava, Crémant and English sparkling wine amongst others all of which have found their way into supermarkets and onto drinks menus in bars across the UK.

The lion’s share of sparkling wine sales in the UK is from Prosecco, however the growth in sales of Prosecco has slowed markedly, with drinkers exploring other fizz offerings.

“Fizz is traditionally enjoyed over the Christmas holiday period and 2018 looks to be another sparkling success for wine makers. UK consumers now have a far greater range to choose from than ever before, including world class English sparkling wines, Cava’s, Prosecco and Crémants. But to allow consumers to continue to enjoy a wide range of quality sparkling wines, the government cannot allow a ‘No Deal’ Brexit which will stifle trade and limit choice. The greatest gift for sparkling wine lovers this Christmas is a deal which allows for frictionless trade without tariffs.”

“We predict Crémant will be particularly popular during Christmas 2018. We’ve seen continued growth over many years and definitely expect that trend to continue. Crémant offers brilliant value for money so it’s enjoying well deserved success.”

A spokesperson for Marks and Spencer said:

“So far it’s been a great festive season for fizz, a couple of highlights from us; Cremant continues to really gain in popularity as customers discover it’s great value and quality, and sales are actually up an impressive 300% on the year! Prosecco isn’t going anywhere and overall our Prosecco sales are up 47%, as customers have enjoyed some great deals on our Prosecco this festive season.”