To further persuade dignitaries to fly the flag for the British drinks industry the WSTA joined forces with the FCO to serve only drinks produced in the UK at the annual reception for overseas diplomats.

For the fourth year running the WSTA arranged for the best of British gin and the finest English fizz to take centre stage at the event – sending out a strong message to serve British.

A survey revealed that “availability” was the biggest stumbling block for diplomats trying to showcase British drinks at their events.

One diplomat commented: “We would very much like to serve a much wider range of gin and more English wine but are often prevented by a lack of availability and ability to import at a reasonable price.”

Sir Simon McDonald, the UK’s top diplomat at the Head of the Foreign and Commonwealth Office, has called for a more concerted effort to encourage UK representatives to “serve British at home and abroad.”

“I am delighted the WSTA once again supported our event – our home-grown spirits and wine sector is flourishing but I would like us to be able to do more.

“Our wine and gin exports are increasingly prestigious, and are now respectively the UK’s the fifth and sixth largest food and drink exports by value. By serving English wine and British gin at our embassies and missions wherever possible, we can help promote the sector and create more jobs and growth.”

The gathered dignitaries also heard from the Foreign Secretary, Jeremy Hunt, who attended the British drinks reception to hand out awards to diplomats.

Ambassadors, High Commissioners, senior diplomats and dignitaries were invited to taste some established and new to the market world class home-grown drinks.

With English wine and British gin now proven as world class products the WSTA hope these influential guests will spread the word through state receptions across the globe.

“It was encouraging to hear that more homegrown wine and spirits are being served at British diplomatic service receptions – both home and abroad – since the WSTA began showcasing a range of English sparkling wines and British gins at the FCO’s annual London reception.

But the strong message coming back to us is that whilst the will is there to serve British it’s not always that easy to get products to far away locations. The WSTA has pledged to continue helping to bridge the gap between demand and supply – not least because our wine and spirit producers need support to achieve their full potential, especially in export markets.

With all the current challenges to international trade, it is even more crucial that our Ambassadors and High Commissioners are flying the flag for our quality British gin and English wine and raising the profile for brand Britain’s premium products.”

In 2018 over 73 million bottles of gin, worth over £2 billion, were sold in the UK, almost doubling in value in two years.

Last year was also a record-breaking year for British gin exports as sales of the quintessentially British spirit abroad reached over £600 million.

If you add exports to sales at home, it adds up to over £2.7bn – putting British gin within touching distance of becoming a £3 billion industry.

In 2018 HMRC records showed that the number of distilleries in England overtook distilleries registered in Scotland for the first time.

Last year was also a standout year for English wine as the heatwave meant a vintage year for both quality and quantity, with a record-breaking yield equating to 15.6 million bottles of still and sparkling wine. This compares to 5.9 million in 2017.

The UK wine industry is proving to be one of the fastest expanding wine regions in the world after seeing the biggest planting of vines on record this year.

The latest planting figures show that around 3 million vines were planted this year, a 24% increase in the overall land now under vine. This is nearly double that planted last year and three times the 1 million vines planted in 2017, making the wine industry one of the fastest-growing agricultural sectors in the UK.

On offer at the reception, which was well attended by dignitaries on Tuesday, 11th June, were four different English sparkling wines and six different British gins.

All of the brands have one thing in common in addition to their collective excellence – all products on offer on the night were from producers looking to expand their export markets.

The WSTA represents an industry worth around £50 billion to the UK and supports over half a million British jobs. 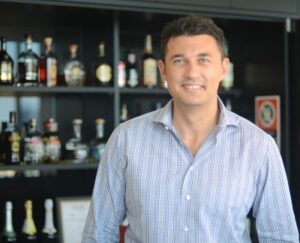 WSTA broadens its base with two new Board members